Thomas and Catherine Young had 7 children. When I look at the names of their descendants in the Genealogy Miller Family compiled by Roy W. Miller of Edmonton, Alberta, I’m amazed at the extent of their progeny. It’s a bit overwhelming to think I want contact all their living relatives. I’d like to hear their family’s stories. So if you’re reading this and are related please contact me. I want to hear from you.

Jacob or Jake was the first child of Thomas and Catherine. He was born about August 20, 1856 on a farm in the 4th concession of Kinloss, Bruce, Ontario.  He married Eliza Margaret Walker sometime before 1880 (the birth year of their oldest son) but their marriage registration is missing. It’s quite possible they didn’t register the marriage.

Jacob Miller and Eliza Walker with Eliza’s sister. (not sure which woman is which)

Like his father and mother Jake’s “life was marked by hard work and industry”. In all the census reports he says his occupation is a farmer but it’s also said he was the first one in the community to own a road grader and he “spent much time in this line of work”. He also conducted a wood business although I’m not exactly sure what kind of wood business. His wife was equally industrious. She was personally greeted by the Prince of Wales on his visit to London Ontario in 1919 for her untiring efforts knitting and making shirts for solders during World War I. How cool is that!

Jake and Eliza had 7 children, 2 daughters and 5 sons; Thomas Albert, Robert Samuel, Maggie Maria (Nina – who was crippled most of her life-stayed at home and never married), Mary Jane (Minnie), Jacob Herbert (Herb), John Summerville Tenant, and Francis (Frank) Henry Nelson. Almost all of their children moved out west to Saskatchewan then some on to British Columbia. Some of them came home for their father’s funeral but I’m not sure if they came home often before that. Frank took over the family farm and Nina stayed at home. 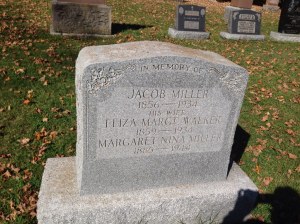 Jake died on February 21, 1934 after a stroke 2 months earlier and exactly 12 weeks later Eliza died unexpectedly of a heart attack. It’s like her heart brake because her husband died. They are both buried in the South Kinloss Cemetery.

For more information on the genealogy research services I offer and rates go to
https://wordpress.com/stats/shymanskigenealogyresearch.wordpress.com

This entry was posted in Miller Family and tagged Jacob Miller and Eliza Walker, Thomas Miller and Catherine Young. Bookmark the permalink.